Congratulations to Graeme who is this year’s club champion. 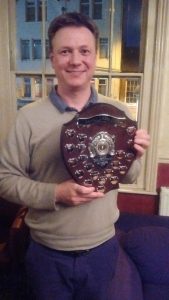 Ray and Mike were unable to attend week 2 so this set up a exciting battle between the others. Graeme stormed through, winning all 3 games, to take the title, beating Joe in the final round. Both he and Charlie drew with Mike Barnes and John Swain. Final scores:

Graeme also treads the boards and will be starring in a Harold Pinter play ‘Betrayal’ at the Lace Market Theatre on 20-25 June. Please see: