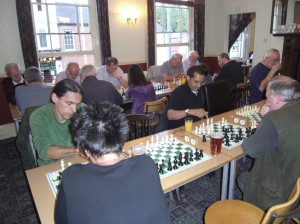 16 players contested our pre-season event and one of our guests won. Jonah Willow stormed to victory with 5/5 after defeating Michael Barnes in the 4th round. Jonah showed remarkable composure in 4 of the rounds where he had either 4 or 6 minutes versus his opponent’s 16 or 14. In round 4 he finally had a time advantage with 14 minutes to Mike’s 6 minutes and put Mike under pressure. Just as it looked like Mike was equalising he dropped a knight in time trouble.

The time handicap proved to be a great leveller as a number of lower graded players defeated so called stronger players. Defending champion John Huthwaite lost to both Derek Padvis and Maggie Gretton and never challenged the leaders. Final Scores: