Congratulations to Pete who won the club championship with about 20 seconds left on his clock after Brian Hayward allowed a mate in one when a whole rook up. 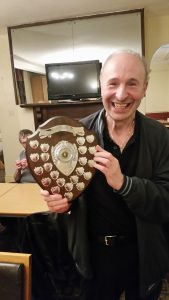 The club championship is a 6 round Swiss held over 2 weeks at the end of the league season with players having 25 minutes for their moves +/- time depending on the difference in grades.

There were no shocks in the 1st two rounds but in round 3 Peter Gorecka-Marshall beat Mike Naylor to join Pete in the lead on 3/3. He continued his fine form by drawing with Pete in round 4 but his run was halted by Brian Hayward in round 5.

Going into the final round, Pete Mercs and Brian Hayward led on 4 points with Mike Naylor, John Huthwaite and Peter Gorecka-Marshall on 3.5 points. Pete G-M and John drew and Mike beat Derek Padvis to finish 2nd on 4.5 points.

Brian had used his time advantage well to go an exchange up v Pete and then won a knight. Although he was now a rook up (Q+R+2 v Q+3), his king was exposed to potential perpetual check (K on g3, pawns on f4 and h3) while Pete’s king was ‘hidden’ on h6 with pawns on h7, g6 and f5. Brian decided to hide his king on h4 but that allowed Pete to play Qxf4#