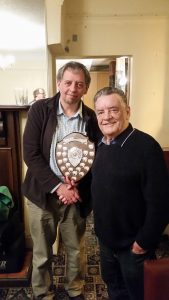 Mike had to work hard to win the title after slipping to a first round draw against a dogged Peter Gorecka-Marshall.

The only shock result in round one was Peter G-M’s draw with Mike. In round 2, Drag Sudar laid a trap which John Swain fell for, leaving Drag on 2 points alongside Pete Mercs and Tom Adams with Mike and Peter G-M on 1.5 points.

In round 3 Peter G-M beat Drag to join Mike in 2nd place behind Pete M who had beaten Tom. Round 4 saw Mike finally wear down Pete M, while Drag missed a chance to win a rook in his draw with Tom.

Drag made up for this in round 5 with a nice win over Pete M while Tom beat Peter G-M and Mike beat Brian Hayward. Mike was worse than Tom in the final round but fought his way back to win and take the title. Drag managed to beat Brian and finished 2nd on 4.5 with Pete M third after beating Mike Naylor.

The club championship is held at the end of the season over 2 weeks with 3 rounds in each week. Games are 25 minutes per person +/- a time handicap depending on differences in grade. This year 16 club members took part.